What are the Best Bitcoin Mobile Wallets?


When the word "cryptocurrency" pops up, the first thing most people usually think about is Bitcoin. It's actually not surprising because since 2009, the digital coin has been dominating the market and has attracted many traders from all around the globe. As Bitcoin price keeps soaring high especially in the last year, many traders got interested in owning some and took a portion of the profit from the hype themselves. In this case, the most important thing that should be remembered both for beginners and professionals is how to store the coins safely.

To be able to store Bitcoin, you will need a Bitcoin wallet. There are many options that you can choose now considering how fast technology has developed and how strong the competition is, so you need to pick wisely as each wallet must have its own pros and cons. Now some of these wallets can easily be accessed straight from your mobile devices. What are they?

Regardless of where you buy Bitcoin, it's important to store them in a safe wallet that you can fully access. The various choices may be a bit overwhelming, so you need to figure out what you need first. Here we have listed the best 10 Bitcoin wallets for Android users.

Ledger Nano X is the newest release from Ledger, a well-known French company that was launched in 2014. Though the device itself is more of a cold wallet than a mobile wallet, it can be accessed via a mobile app. As a hardware wallet, Nano X can provide better security compared to other wallets. Therefore, Nano X delivers both comfort and security for its users. The Nano X basically resembles a USB drive and can be connected to your Android device via USB or Bluetooth. It supports at least 1,500 cryptocurrencies, including the largest crypto, Bitcoin. By using Nano X, you can access and manage your wallet, as well as add new wallets for different cryptocurrencies in your device. Based on the user reviews, the installation and setup procedures are still not perfect. But overall, it is one of the easiest choices to keep your coins securely.

Mycelium is one of the top mobile-only app wallets offering a wide range of advanced privacy and security features. The company currently supports Bitcoin, ETH, ERC-20 tokens, and FIO token. Like Nano X, Mycelium also supports a hardware wallet, which allows you to hold Bitcoin in an offline storage device while managing it from a mobile app. As an open-source program, Mycelium constantly upgrades itself to provide various new features. However, the wallet's interface can be a bit complicated at times for first-time users, so it might take a while to understand the system fully. Also, keep in mind that as a mobile-only wallet, Mycelium doesn't have a web or desktop interface, so you can only open it through your mobile device.

ZenGo offers a new kind of cryptocurrency wallet that allows users to store their coins without securing their private keys. So the private key will be encrypted and stored on ZenGo's server. Users can access it by using Android's facial recognition technology. This does make it easier to restore your wallet if it's ever lost, but you must completely trust ZenGo as they hold and protect your keys. There are several additional features offered by ZenGo such as coin stacking, coin exchange, and a highly intuitive UI. The wallet is free to use apart from the fees of buying and trading crypto.

Edge or formerly known as Airbitz is a multi-currency Bitcoin wallet for mobile users. As open-source software, Edge is considered to be exceptionally secure. It aims to provide a great service for its users and has beginner-friendly features, such as providing a list of businesses that accept Bitcoin. By partnering with the merchants, users can get discounts and even able to buy gift cards straight from the app on their mobile devices. Other than that, you can also use the fingerprint feature on your device to access the wallet. The drawback to this wallet is that it doesn't support hardware wallets so it is less secure and sometimes purchases through the in-app exchange are rather slow.

It is widely known that Blockstream Green is one of the most secure Android Bitcoin wallets on the market right now. It uses a 2-of-2 style backup so if you ever lose your backup, you can restore it by using the two-factor authentication system. It is also really simple to set up since it only requires an email address for registration. The app is multilingual and has great support from the company. Blockstream Green is also compatible with Ledger and Trezor hardware wallets if you want to increase your security. However, it's worth noting that some features may be too complicated for beginners and the two-factor recovery can be confusing at times.

Coinomi is a popular Bitcoin wallet for Android users. It offers a secure system by providing no identity linking, no transaction tracking, no IP association, and no KYC needed within the wallet. It is a non-custodial wallet, which means that it stores your private keys to your wallet on your device. Also, they will require you to set a password for more sensitive actions such as withdrawals and the recovery process. The secure and fast installation makes Coinomi a very popular Bitcoin wallet among crypto traders and Android users. The only concern that you should know is that Coinomi is no longer open-source. Nevertheless, many users are still satisfied with their service and Coinomi is not the only excellent wallet that is not open-source.

BRD Wallet is a US-based wallet that is suitable for new users who are just getting started with Bitcoin trading. The UI is probably the best among other Bitcoin wallets for Android devices and you don't need to do any sign-up process to use it. It is also considered secure because it is open-source and has an in-app exchange built-in. However, some users reported that they had found some syncing issues and bad technical support. 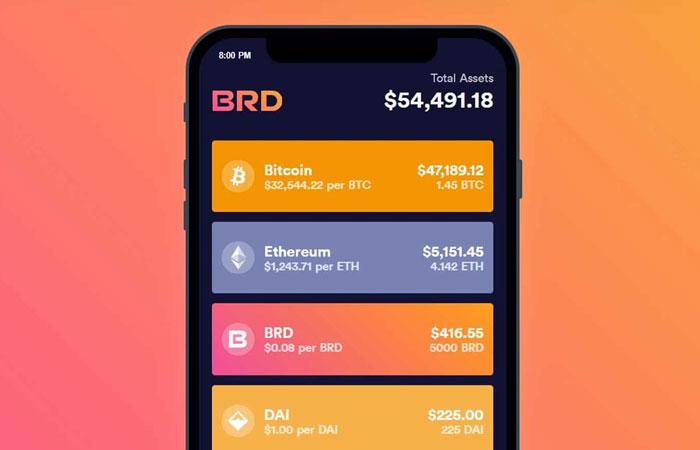 Abra is a great mobile Bitcoin wallet that allows you to trade and exchange crypto with fiat currency. As a wallet, it does not only allow you to store Bitcoin but also several other cryptocurrencies such as Bitcoin Cash and Litecoin. 27 additional coins can be added through the app but not stored on it. To sign up, you will be required to use an email address and phone number. It's possible to stay anonymous but there are drawbacks. Overall, the app is quite smooth and easy to use even for a complete beginner. Atomic Wallet is a multi-currency mobile wallet that supports more than 500 cryptocurrencies. The best thing about it is that it is integrated with the decentralized exchange called Atomic Swaps. In addition, the wallet has a built-in ShapeShift, ChangeNOW, and Changelly exchange interface for coins that are not supported in the Atomic Swaps. Apart from that, Atomic Wallet is known to be ideal for beginners because it is free to use and allows them to buy coins directly through the wallet. The only significant drawback is that several users reported some technical issues with the app itself.

Jaxx Liberty is a very popular Canada-based mobile wallet that supports over 80 cryptocurrencies including Bitcoin, ETH, and Litecoin. One of the greatest features of Jaxx is that it allows you to do cross-platform pairing, which means you can link and access your wallet from multiple devices. Jaxx also has a built-in exchange called ShapeShift that lets you exchange crypto within the wallet. Another benefit is that it is free to use and provides an incredibly informative news panel to keep you informed about what's going on in the cryptocurrency market. Some users, however, reported that they had found some technical issues with the app.

Mobile Bitcoin Wallets: What You Need to Know

If we talk about comfort and ease of use, mobile wallets are definitely the best because you can access them very easily, as people usually bring their mobile devices wherever they go. However, it is important to understand that mobile wallets are not the safest place to store your Bitcoin.

By downloading a mobile Bitcoin wallet, you basically store your private key to your device. If your device is missing, so does your private key. The same situation occurs if your device is broken, which can easily happen to any mobile phone. In such cases, it's possible to recover your wallet by using your seed phrase (a group of words to access a crypto wallet), so make sure to keep it in a safe place.

However, things may get more complicated if your phone gets stolen. If this happens, an experienced hacker may try to break into your wallet and gain access to your coins quicker than your recovery attempt.

It's crucial to understand the risk before using a mobile Bitcoin wallet. It should be used with caution and awareness because while it is undoubtedly easy to use, it is also less secure. Our suggestion is to only store a small to moderate amount of Bitcoin in your mobile phone. Meanwhile, the bigger portion of your Bitcoin should be stored in a safer wallet such as a hardware wallet.

To further secure your coins, there are several ways that you can do, such as setting a pin code protection for your wallet and keeping your smartphone in a safe place.

Also, keep in mind that not all Bitcoin mobile wallets on Google Play are verified. That means some people can create a seemingly reassuring wallet to steal your coins once you store them in your device. So, always make sure to research beforehand and download the official app before you decide to trust a bitcoin wallet for Android to keep your coins.

All in all, mobile wallets are great only if you know the risks and how to anticipate them. Another risk regarding Bitcoin that should be also at the center of your attention is the many types of scams. You can learn all about them in Top Bitcoin Scams You Should Watch For.

Galtier: Hey, I also had my doubts about crypto for the first time, but then I learned that crypto is actually very safe from hackers. I know it is almost impossible to do. I can't explain like IT expert but I will do it with simple explanation. Blockchain in crypto has something like a room door, but it's locked with a password, and every letter in the password changes every time, affecting another letter. And when one crypto being confirmed or created it will create another door with another password. So hackers cannot hardly hack it directly, so the heacker decided to hack an open way to access the crypto and mostly they attack the wallet. About the crypto wallet, There are offline wallets and online wallets. Accessing the offline wallet requires entering a password that is automatically generated when the wallet is created and shared only once. Therefore, once you create this password, you should write it down and store it. Hackers also commonly trick users into sharing their passcodes. If you have an online wallet stored on a cryptocurrency exchange, hackers can attack the system and force you to provide your password. So keep your wallet safe and don't tell anyone about your wallet passcode, account, and choosing reliable online wallet crypto. If you do that it is surely 100% safe

Is Quantum Computing a Threat to Crypto and Blockchain Technology?

What is Blockchain Trilemma?

How to Deposit Euro on Binance with Bank Transfers