A short term trading strategy with simple indicators, the 5-minute strategy with EMA is a complete trading setup with a way of managing risks and optimizing profits from the price momentum.


Experienced traders will wait until the setup is perfect before opening positions. And then there are those who will make a move upon seeing a hint of change in trend direction. These are the momentum traders; quick to ride on trend reversal but quick to exit positions as well. If you are one of them, you need a solid strategy to enter and exit the market at the best possible time. The 5-minute strategy with EMA below can help you ensure the profit while simultaneously increasing it.

This is a momentum strategy that aims to gain profits from changes in trend direction. The strategy involves the following indicators:

A 5-minute chart is used to look for momentums in a very short term. On the chart, activate the two technical indicators, the first of which is the 20-period EMA (Exponential Moving Average) to help determine trends. The EMA places more weight on recent prices, thus it is more sensitive to price movements compared to the SMA (Simple Moving Average). The second indicator is the MACD to confirm the momentum. We use the default setup for the MACD which is 12-period EMA and 26-period EMA as well as 9-period EMA as the signal line.

We enter a trade in two parts. Stop loss order is used in the first part to lock in profit. In the second part, the stop loss is moved to breakeven to eliminate the risk of losing. The position will remain open to extend our profit as much as possible until the trailing stop is triggered. To implement this strategy, it will be really helpful if your broker offers a platform that supports automated entries, exits, stop loss, as well as trailing stops.

For a long position, wait until the price crosses above the 20-period EMA and the MACD has crossed to positive within the last five bars (25 minutes). Then, follow the steps below.

See Also: How to Use MACD Effectively

On March 16, 2006, the EUR/USD occasionally moved above the 20 SMA. However, we didn't open trade since the MACD was still negative. The MACD finally crossed to positive when the price was 1.2044. The strategy was executed as follows: 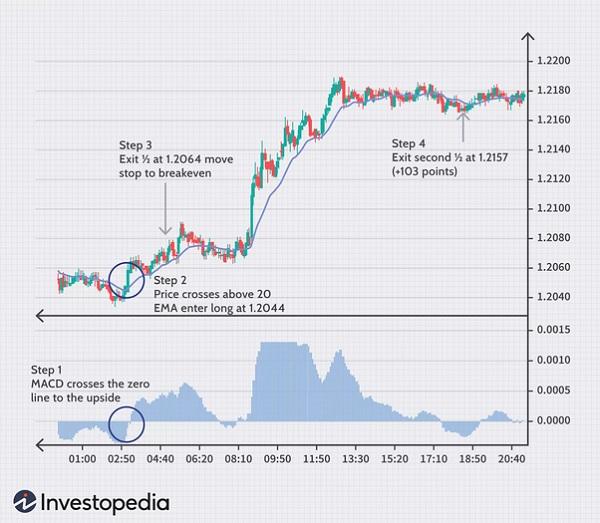 The next scenario is for AUD/USD. The price crossed above the 20 EMA when the MACD was already positive, so we entered a long position immediately. We waited until the price moved above the 20 EMA by 10 pips, which occurred when the EMA was at 0.75053. Now, we followed the strategy.

See Also:Practical Use of Moving Averages: EMA-20 and EMA-60 Crossover

We enter a short position when the price moves below the 20 EMA and the MACD has been negative within the last 25 minutes or five bars. Afterward, apply the following rules:

The 5-minute chart below is the NZD/USD on March 20, 2006. The price movement and MACD crossing didn't occur simultaneously at first, so we had to follow the chart closely. The currency traded below the 20 EMA beforehand, and we waited for 25 minutes until the MACD crossed to negative when the price moved to 0.6294. Let's implement the strategy step by step. Let's take a look at the 5-minute chart of GBP/USD below. The MACD turned negative along with the crossing of the price below the 20 EMA. Enter a short position by following the strategy:

This strategy allows traders to gain profits from reversal movements. The 20 EMA is used to gauge new trends and the MACD is utilized to confirm whether the momentum is in place. However, while both indicators reinforce each other, the signal given is not always correct. During an uncertain period in the market, the price may simply fluctuate around the 20 EMA while the MACD alternately turns positive and negative, leading to false signals. This is because the trading ranges are either too tight or too wide. Currency pairs with a wide range of movement can expose the flaw of this strategy, causing the stop to be hit earlier than the target.

Let's see the 5-minute chart of GBP/JPY above. The pair traded below the 20 EMA and the MACD had turned negative. We entered a short position at 138.786, setting our stop loss at 20 pips plus the EMA (138.986). The initial target was the entry price minus 30 pips, which was 138.486. The pair continued to move downside and hit our initial target. But the movement didn't continue and caused our remaining position to be closed at the breakeven level, which was set right at the entry level around 138.786. The outcome was therefore at an impasse if we didn't count the spread.

The 5-minute trading strategy with EMA provides an opportunity for traders to profit on a short burst of momentum. The strategy guides traders to open and close positions at the best possible time. With the help of risk management tools (stop loss and trailing stop) momentum traders can stay on the trends as long as possible with minimal risks as the profit is already protected. Just keep in mind that this strategy has its flaws too and in the end, the market condition is the one dictating the results.


With years of trading in the market and useful lessons I experience firsthand, I wish to provide forex traders with tips and tricks that can improve their skills and strategies.

How to Day Trade with Three-Bar Reversal Pattern

USD/CHF
Now
Three Outside Down